Dust sputtering within the inner heliosphere: a modelling study 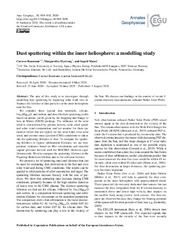 The aim of this study is to investigate how sputtering by impacting solar wind particles influence the lifetime of dust particles in the inner heliosphere near the Sun.

We present a set of sputtering rates and lifetimes that can be used for estimating dust destruction in the fast and slow solar wind and during CME conditions. Our results can be applied to solid particles of a few nm and larger. The sputtering lifetimes increase linearly with size of particles. We show that sputtering rates increase during CME conditions, primarily because of the high number densities of heavy ions in the CME plasma. The shortest sputtering lifetimes we find are for silicate, followed by Fe0.4Mg0.6O and carbon. In a comparison between sputtering and sublimation lifetimes we concentrate on the nanodust population. The comparison shows that sublimation is the faster destruction process within 0.1 AU for Fe0.4Mg0.6O, within 0.05 AU for carbon dust and within 0.07 AU for silicate dust. The destruction by sputtering can play a role in the vicinity of the Sun. We discuss our findings in the context of recent F-corona intensity measurements onboard Parker-Solar-Probe.