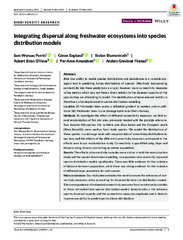 Aim - Our ability to model species distributions and abundances is a valuable ecological tool in predicting future distributions of species. Effectively incorporating connectivity into these predictions is crucial; however, many connectivity measures utilize metrics which may not have a direct relation to the dispersal capacity of the species they are attempting to model. The identification of more relevant metrics is therefore a vital step forward in species distribution modelling.

Methods - To investigate the effect of different connectivity measures, we first record recolonization of fish into lakes previously treated with the piscicide rotenone. Two invasive fish species, the northern pike (Esox lucius) and the European perch (Perca fluviatilis), were used as focal study species. We model the distributions of these species in a drainage basin with snapshot data of present‐day distributions to see how well the effects of the different connectivity measures correspond to the effects seen in our recolonization study. Connectivity is quantified using slope and distance along streams connecting lacustrine populations.

Results - The effects of connectivity variables were similar in both the recolonization study and the species distribution modelling. Incorporation of connectivity improved species distribution models significantly. There was little evidence for the inclusion of distance between populations, while there was strong evidence for the inclusion of different slope parameters for both species.