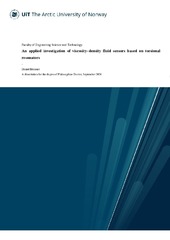 Real-time viscosity and density measurements give insight into the status of many chemical and biochemical processes and allow for automated controls. In many applications, sensors that enable the real-time measurements of fluid properties use resonant elements. Such sensors measure induced changes in the element’s resonance frequency and damping that can be related to the fluid properties. These sensors have been widely researched, though they are not yet commonly used in industrial processes. This study investigates two resonant elements to measure the viscosity and density of Newtonian fluids. The first is a probe-style viscosity-density sensor, and the second is a non-intrusive tubular viscosity sensor. These two sensors were investigated using analytical, numerical, and experimental methods. In the analytical method, the sensors’ resonance frequencies and bandwidths were predicted based on reduced-order models for both structure and fluid. In the numerical method, the interaction of the resonant element with the fluid was investigated by means of computational fluid dynamics (CFD). Experiments were conducted for validation, to evaluate the sensors’ capabilities, and understand cross-sensitivity effects between viscosity and density. This work successfully modeled and validated the two different torsional resonant element sensors, namely the probe-style viscosity-density sensor and the tubular viscosity sensor against experiments. There are two key output parameters, i.e., resonance frequency and bandwidth. Using these parameters, it is possible to predict fluid viscosity and density. Overall, this work demonstrates the potential of numerical modeling for the development of torsional resonance sensors. These findings directly affect the development of the future generation of fluid viscosity and density sensors.