The identity conflict of the Csango minority from Romania 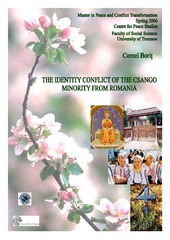 In the eastern province of Romania, also called Moldavia, lives a minority group of nearly a quarter of a million people named Csangoes, designated by the religious allegiance to the Roman-Catholic Church, and the use of Hungarian language as mother tongue by approximatively 60 000 people. The common literature of the last period has launched the idea that the Csangoes represent a mysterious minority whose origins have been lost in time, due to the isolation of the ermetic communities, most of them in rural environment.

A sound scientific research reveals that this image represents just a construction, which is part of a historical process initiated by the Romanian state at the middle of the 19th century, with the purpose of assimilating the Csango minority to the Romanian majority. The process included the ethnic components, leaving unspoiled the Catholic faith, which differs from the majority Orthodox Romanians.

During the last decades, after the totalitarian Communist regime fell, several members of the Csango minority initiated a project of cultural revival, meant to reassess the ethnic identity of the group. This endeavour created the premises for a conflict between the supporters of the Hungarian origin of Csangoes, and the radical nationalist Romanians, backed up by the Catholic Church officials, who are willing to defend the achievements of the centuries long assimilation process, which ended up in constructing a Romanian identity for most of the Csangoes.