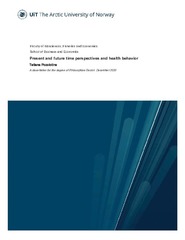 Background and purpose: Lifestyle diseases are the leading cause of life-time disability and death in modern society. Knowledge of the underlying causes and mechanisms of health behavior choices is crucially important when developing health-promoting campaigns and planning health behavior interventions. This dissertation aimed to advance our understanding of the relationship between time perspective (TP) and health behavior. The six major objectives were:

Conclusions and practical implications:The results of the study indicate that the present and the future TPs are related but distinct constructs that differentially predict healthy and unhealthy behaviors. The relationship between CFC and health behavior is likely influenced by regulatory focus. In western societies, where the promotion regulatory orientation dominates, individuals are more likely to be motivated by approach goals rather than avoidance goals. The findings suggest that future orientation was associated with healthy behaviors, but not with unhealthy behaviors. At the same time, present-oriented people were more engaged in unhealthy behaviors, but were not less engaged in healthy behaviors. The findings suggest that emphasizing the future health benefits of healthy choices and reducing the immediate attractiveness of unhealthy choices might be more effective in the Norwegian population.

Another finding was that CFCS-based population profiles were more predictive of health behaviors than ZTPI-based profiles; however, the profiles based on a combination of CFCS and ZTPI differed in their health behaviors the most. These findings could be helpful when choosing the basis on which to segment the population during health intervention programs.

We demonstrated that a domain-specific CFC-health was more effective at predicting health behaviors than a general CFC. The usage of CFC-health in future studies might increase effect sizes and the overall predictive power of the models and, thus, decrease the ambiguity of the findings.

Finally, we showed that lack of connection with the future self influenced health behaviors both directly and indirectly. This finding emphasizes the importance of the programs aiming to increase individual connectedness to the future self.