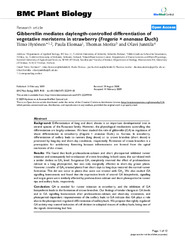 Background: Differentiation of long and short shoots is an important developmental trait in several species of the Rosaceae family. However, the physiological mechanisms controlling this differentiation are largely unknown. We have studied the role of gibberellin (GA) in regulation of shoot differentiation in strawberry (Fragaria × ananassa Duch.) cv. Korona. In strawberry, differentiation of axillary buds to runners (long shoot) or to crown branches (short shoot) is promoted by long-day and short-day conditions, respectively. Formation of crown branches is a prerequisite for satisfactory flowering because inflorescences are formed from the apical meristems of the crown.
Results: We found that both prohexadione-calcium and short photoperiod inhibited runner initiation and consequently led to induction of crown branching. In both cases, this correlated with a similar decline in GA1 level. Exogenous GA3 completely reversed the effect of prohexadionecalcium in a long photoperiod, but was only marginally effective in short-day grown plants. However, transfer of GA3-treated plants from short days to long days restored the normal runner formation. This did not occur in plants that were not treated with GA3. We also studied GA signalling homeostasis and found that the expression levels of several GA biosynthetic, signalling and target genes were similarly affected by prohexadione-calcium and short photoperiod in runner tips and axillary buds, respectively.
Conclusion: GA is needed for runner initiation in strawberry, and the inhibition of GA biosynthesis leads to the formation of crown branches. Our findings of similar changes in GA levels and in GA signalling homeostasis after prohexadione-calcium and short-day treatments, and photoperiod-dependent responsiveness of the axillary buds to GA indicate that GA plays a role also in the photoperiod-regulated differentiation of axillary buds. We propose that tightly regulated GA activity may control induction of cell division in subapical tissues of axillary buds, being one of the signals determining bud fate.