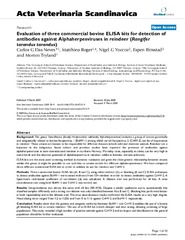 Background: The genus Varicellovirus (family Herpesviridae subfamily Alphaherpesvirinae) includes a group of viruses genetically and antigenically related to bovine herpesvirus 1 (BoHV-1) among which cervid herpesvirus 2 (CvHV-2) can be of importance in reindeer. These viruses are known to be responsible for different diseases in both wild and domestic animals. Reindeer are a keystone in the indigenous Saami culture and previous studies have reported the presence of antibodies against alphaherpesviruses in semi-domesticated reindeer in northern Norway. Mortality rates, especially in calves, can be very high in some herds and the abortion potential of alphaherpesvirus in reindeer, unlike in bovines, remains unknown. ELISA kits are the most used screening method in domestic ruminants and given the close genetic relationship between viruses within this genus, it might be possible to use such kits to screen cervids for different alphaherpesviruses. We have compared three different commercial ELISA kits in order to validate its use for reindeer and CvHV-2.
Methods: Three commercial bovine ELISA kits (A, B and C), using either indirect (A) or blocking (B and C) ELISA techniques to detect antibodies against BoHV-1 were tested with sera from 154 reindeer in order to detect antibodies against CvHV-2. A Spearman's rank-based coefficient of correlation (ρ) was calculated. A dilution trial was performed for all kits. A virus neutralization test using both BoHV-1 and CvHV-2 was carried out.
Results: Seroprevalence was almost the same with all kits (40–41%). Despite a similar qualitative score, quantitatively kits classified samples differently and a strong correlation was only identified between Kits B and C. Blocking kits performed better in both repeatability and in the dilution trial. The virus neutralization results confirmed the ELISA results to a very high degree. Neutralizing titres ranged from 1:2 to 1:256 and from 0 to 1:16 against CvHV-2 and BoHV-1 respectively.
Conclusion: Results show that the genetic and antigenic similarity between BoHV-1 and CvHV-2 enables the use of a bovine gB blocking ELISA kit to screen reindeer. The use of an ELISA kit is both cheaper and time saving, allowing screening of large populations. This study revealed a high number of positive animals against CvHV-2 and its impact and distribution in the general population should be further evaluated.