Effect of light quality on the biosynthesis of flavonoids and sugars in bilberry (Vaccinium myrtillus L.) 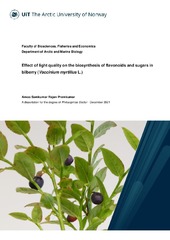 Berries are abundant in bioactive compounds. Bilberry or European blueberry (Vaccinium myrtillus L.) is in particular gaining worldwide attention being one of the best natural sources of antioxidant rich phenolics that accumulate in both skin and flesh during fruit ripening. Alongside, the ubiquitous presence of anthocyanins and related flavonoids, it also contains other compounds such as carotenoids, stilbenes, terpenoids, vitamins and sugars. Especially flavonoids and sugars have major effect of fruit quality. Beside the genetic adaptation by the latitude-based cultivars and ecotypes, altering environmental conditions play a major role in determining the bioavailability of these compounds. Especially, the light quality impacts several secondary metabolic processes, thus by interacting with the number of known positive regulators and repressors of light signaling. The thesis is focused on understanding the biosynthesis and regulatory mechanisms of the key quality compounds, flavonoids and sugars, in bilberry in response to different light qualities from the photosynthetically active radiation (PAR) spectrum. The light quality experiments were carried out in controlled conditions by mimicking single wavelength light spectra of red, blue and far-red using LED-light systems. The promising results showed that indeed supplemental light wavelengths have a positive effect on anthocyanin and sugar biosynthesis in bilberries. Especially, delphinidins were found to be the most reactive class of anthocyanins in response to red light treatments, which increased the concentration several fold in fully ripe berries. The transcriptomic data revealed that the abscisic acid (ABA) biosynthesis and signaling was found to regulate the anthocyanin accumulation, where even the ABA degrading enzyme, ABA-8'-hydroxylase, acted as positive signaling factor. However, the results showed a differential effect or opposite response pattern towards red and blue light in berries which are ripening independently of mother plant to that of naturally attached ripening berries. Interestingly, the blue light influenced the anthocyanin biosynthesis in detached berries to the most, and resulted in highest anthocyanin levels quantified in fully ripe bilberries. The study also showed the effect of light quality on sugar metabolism from the differentially expressed genes (DEGs) data, where both red and blue light influenced the starch and sucrose metabolism. Supplemental red light also increased the amount of sugars in ripe bilberry. The findings of this study will drive-forward the plant research communities towards better understanding on the effect of light on fruit ripening and improving quality. The results can also be further utilized in future commercial breeding programs or cultivation practices of wild Vaccinium berries with improved value-added properties.

The data that support the findings of this thesis are openly available in NCBI-SRA database at http://www.ncbi.nlm.nih.gov/bioproject/747684, reference number [PRJNA747684].