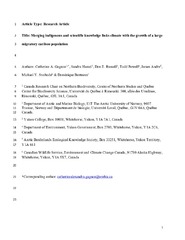 1. Climate change in the Arctic is two to three times faster than anywhere else in the world. It is therefore crucial to understand the effects of weather on keystone arctic species, particularly those such as caribou (Rangifer tarandus) that sustain northern communities. Bridging long-term scientific and indigenous knowledge offers a promising path to achieve this goal, as both types of knowledge can complement one another.

2. We assessed the influence of environmental variables on the spring and fall body condition of caribou from the Porcupine Caribou Herd. This herd ranges in the Yukon and Northwest Territories (Canada) and Alaska (USA), and is the only large North American herd that has not declined since the 2000s. Using observations recorded through an indigenous community-based monitoring programme between 2000 and 2010, we analysed temporal trends in caribou condition and quantified the effects of weather and critical weather-dependent variables (insect harassment and vegetation growth), on spring (n = 617 individuals) and fall (n = 711) caribou condition.

3. Both spring and fall body condition improved from 2000 to 2010, despite a continuous population increase of ca. 3.6% per year. Spring and fall caribou condition were influenced by weather on the winter and spring ranges, particularly snow conditions and spring temperatures. Both snow conditions and spring temperatures improved during our study period, likely contributing to the observed caribou population increase. Insect harassment during the previous summer and the frequency of icing events also influenced caribou condition.

4. Synthesis and applications. Our study shows how untangling the relative influences of seasonal weather variables allows a much better understanding of variation in seasonal body condition of caribou. It indicates that a large migratory caribou population can grow and improve condition in a global context of caribou decline and climate warming, thereby warning against generalizations about the influence of climate on all caribou populations. Finally, it testifies how data from indigenous community-based monitoring can remarkably improve ecological understanding of wildlife sustaining human communities. Where possible, we recommend management practices that respectfully engage with indigenous community-based monitoring, as this can enhance knowledge and relationships with communities, both prerequisites of successful resource management.