Behavioral and energetic response of Arctic-breeding seabirds to environmental variability. 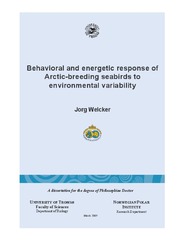 Knowledge about the extent to which organisms inhabitating the Arctic are able to adjust to environmental variability is essential in order to predict the impact of future climate change. In this context, the flexibility og two Acrtic-breeding seabirds, the little Auk (Alle alle) and the kittiwake (Rissa tridactyla), in foraging behavior and energy expenditure in response to environmental variability. Analysis of the foraging behavior of little auks revealed the during chick-rearing this species adopts a bimodal foraging strategy in which they alternate single foraging trips of long duration with several trips of short length. This stereotyped pattern was found to be highly flexivle and adjusted to psatial and temporal variation in foraging conditions. However, behavioral modifications led to reduced chick feeding rates and lower reproductive success, indicating the adjustments did not allow birds to fully compensate for costs incurred by unfavorable conditions. Adjustment and limitation of energy expenditure differed remarkably between the two study species. Metabolic rate in little auks was flexible and adjusted in response to variation in food availability. Birds increased energy expenditure when food was abundant. Elevated metabolism was associated with increased chick provisioning, resulting in enhanced chick surival, and increased resource allocation to self-maintenance, associated with higher body mass and a higher return rate of individuals the subsquent season. In contrast, kittiwakes did not adjust their metabolic rate in response to environmental variability. In this species, metabolic rate was similar across five study years despite large variation in foraging conditions. Instead, kittiwakes seemed to operate close to an energetic ceiling which seemed independent of extrinsic factors. This study suggested a limited ability of Arctic seabirds to compensate for large variation to environmental conditions.