Staying alive : the survival and importance of Atlantic salmon post-spawners 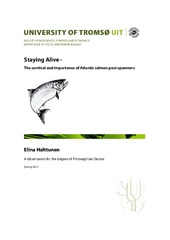 Summary Atlantic salmon (Salmo salar L.) repeat-spawners might play an important role in population persistence by increasing both total recruitment and long-term stability of a population. This is because repeat spawners return at larger sizes and with greater fecundity than first time spawners, and the large majority of repeat-spawners are females. Nevertheless, little knowledge exists of this potentially significant population sub-unit. We conducted a four-year field study in the River Alta, Northern Norway, using acoustic and radio telemetry combined with scale sample analysis and mark recapture, with the aim of 1) assessing the survival and migration patterns after spawning, 2) assessing the post and repeat-spawner mortality in the fisheries, and 3) quantifying the returning rate of post spawning females. These results were further used in combination with historical catch-records from both sea and in-river fisheries to 4) model the repeat spawning rate in the female population and the significance of repeat spawning for egg production during fluctuating maiden runs. We found that 1) survival after spawning and early marine migration was high (63-80% and 96%, respectively), and that the post-spawners (kelts) in best condition waited longest in the river before migrating. 2) The fisheries mortality was low (4%) when exiting the river and fjord, and moderate (11 %) when re-entering the fjord and river upon return. 3) Female survival until spawning was on average 32 %, and 4) according to model simulations, on average 20% of the female population consisted of repeat-spawners, which might have an important stabilizing function reducing fluctuations in a population by contributing an average of 27% (2%-59%) of all the eggs spawned in the river. We conclude that the post-spawners have high survival both in the river and the sea despite their weakened condition after spawning and overwintering in the river, and that repeat-spawners might contribute significantly to Atlantic salmon production. Their numeric and genetic contribution might be especially important during declining and fluctuating populations as a buffer against poor maiden recruitment years. Therefore post- and repeat-spawners are worthy of special conservational attention and management measures.