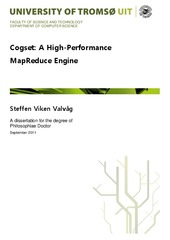 MapReduce has become a widely employed programming model for large-scale data-intensive computations. Traditional MapReduce engines employ dynamic routing of data as a core mechanism for fault tolerance and load balancing. An alternative mechanism is static routing, which reduces the need to store temporary copies of intermediate data, but requires a tighter coupling between the components for storage and processing. The initial intuition motivating our work is that reading and writing less temporary data could improve performance, while the tight coupling of storage and processing could be leveraged to improve data locality. We therefore conjecture that a high-performance MapReduce engine can be based on static routing, while preserving the non-functional properties associated with traditional engines. To investigate this thesis, we design, implement, and experiment with Cogset, a distributed MapReduce engine that deviates considerably from the traditional design. We evaluate the performance of Cogset by comparing it to a widely used traditional MapReduce engine using a previously established benchmark. The results confirm our thesis that a high-performance MapReduce engine can be based on static routing, although analysis indicates that the reasons for Cogset's performance improvements are more subtle than expected. Through our work we develop a better understanding of static routing, its benefits and limitations, and its ramifications for a MapReduce engine. A secondary goal of our work is to explore how higher-level abstractions that are commonly built on top of MapReduce will interact with an execution engine based on static routing. Cogset is therefore designed with a generic, low-level core interface, upon which MapReduce is implemented as a relatively thin layer, as one of several supported programming interfaces. At its core, Cogset provides a few fundamental mechanisms for reliable and distributed storage of data, and parallel processing of statically partitioned data. While this dissertation mainly focuses on how these capabilities are leveraged to implement a distributed MapReduce engine, we also demonstrate how two other higher-level abstractions were built on top of Cogset. These may serve as alternative access points for data-intensive applications, and illustrate how some of the lessons learned from Cogset can be applicable in a broader context.