Stoichiometry of lipid synthesizing calanoid copepods in Arctic and sub-Arctic marine regions Insights into limitation and elemental cycling from characterization of C:N:P ratios 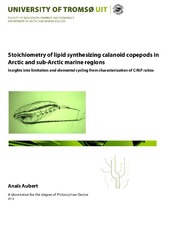 Calanoid copepods, Calanus finmarchicus, C. glacialis and C. hyperboreus, are key species in Arctic and sub-Arctic marine ecosystems. They represent important prey for a number of species such as juvenile herring and cod because of their high but seasonally variable calorific value: they synthesize and store lipids as part of their survival strategy. Limitations in food quantity and quality can have strong impact on the copepods’ lipid synthesis and development, with implications for their predators and thus for the lipid-driven Arctic marine food web. Ecological stoichiometry, i.e. the study of the relative abundance of elements (most commonly carbon, nitrogen, and phosphorus) in biological entities, is a powerful tool to study potential limitation of aquatic organisms, particularly in primary producers and in omnivorous and herbivorous zooplankton grazers. However, studies that apply a stoichiometric approach to the high-latitude marine regions are extremely rare. The main aim of this thesis is to reveal the elemental requirements and potential limitation of high-latitude calanoid copepods by investigating their C:N:P composition in combination with information on other biochemical compounds. The impact of copepods on nutrient recycling and C:N:P export through fecal pellets is also investigated. The study was conducted in a sub-Arctic north-Norwegian fjord, and in the western part of the European Arctic Ocean, focusing on the period of intense primary production during spring. Somatic stoichiometric ratios in copepods were calculated by subtracting C in the lipid sac from the total body C. Due to the strong influence of lipid storage on total body stoichiometry, high-latitude calanoid copepods, and by implication lipid-synthesizing zooplankton in general, should be treated through a two-compartment stoichiometric approach, with lipid storage and somatic tissues separated. Both season and development stage influence the somatic elemental ratios. The somatic C:P ratios of high-latitude calanoid copepods are somewhat lower than those reported in marine copepods from other areas, suggesting that they have higher growth rates than temperate and tropical copepods. Seston C:N:P stoichiometry is used as a proxy for food quality in the calculation of copepod elemental limitation. The seston C:P and N:P ratios are among the first to be reported for the Arctic Ocean and indicate a higher relative proportion of nutrients (N and P) compared to published seston values from other marine regions. Seston C:N:P ratios varied according to bloom stage, which therefore also impacts the potential C, N or P limitation of copepods. Unless they have high assimilation efficiency for C, calanoid copepods are shown to be most likely subject to C limitation. However, variable requirements during ontogeny make specific stages, such as copepodite IV, and females more sensitive to nutrient limitation (N or P). This study is the first to present data on stoichiometric ratios including P for copepod fecal pellets in the Arctic, and shows their high potential not only to vertically export P at depth but also to provide a source of P in the upper layers during the productive season if degraded. The Arctic marine regions are experiencing the greatest climate change, and the potential future stoichiometric changes in the Arctic and how climate change affects copepod-seston interaction are discussed.