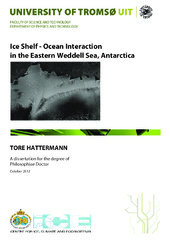 This thesis investigates the interaction of the Antarctic ice shelves along the coast of Dronning Maud Land with the ocean circulation in the Eastern Weddell Sea. A set of direct oceanic observations below the Fimbul Ice Shelf, which were acquired during three Antarctic field seasons in the austral summers 2009/10, 2010/11 and 2011/12, is a central element of the presented work. This new oceanographic dataset is complemented by a high-resolution state-of-the-art ice shelf - ocean circulation model. The results provide an estimate of the amount of basal melting at the Fimbul Ice Shelf, and revise the physical processes that determine the ocean heat fluxes over the East Antarctic continental slope. A major finding is that deep-ocean heat fluxes towards the ice are much more constrained than predicted by previous ocean models, causing substantially lower rates of basal melting than earlier suggested. The predicted basal melting is consistent with mass balance estimates from satellite data and implicates that the Fimbul Ice Shelf is currently not subject to rapid basal mass loss. Furthermore, the complex interplay of the processes within the coastal, frontal system, and their respective role in transporting heat for melting towards the ice is examined. The results emphasize the importance of oceanic eddies within the coastal circulation for controlling the inflow of Warm Deep Water into the ice shelf cavities. A realistic representation of the effect of the mesoscale eddy overturning is thus a crucial requirement in order to simulate basal melting along the Weddell Sea coast in the present and future climate. The results also imply that fresh, and solar-heated Antarctic Surface Water plays a central role for the ice shelf cavity exchange. Being produced by sea ice melting at the ocean surface, this water mass directly enters the cavity and increases the melting of shallow ice. Due to its buoyancy, the presence of Antarctic Surface Water also alters the coastal dynamics and regulates the inflow of warm water at depth, thus showing that a more detailed understanding of the role of this water mass for basal melting around Antarctica will need further attention. Finally, the results suggest a direct relationship between the simulated basal melting and only a few deterministic parameters of the coastal circulation, which is used to derive a simple parameterization of for basal melting at the Fimbul Ice Shelf.