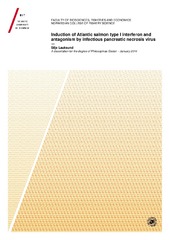 Viral infections are a leading cause of mortality in the farming of Atlantic salmon in Norway. Viral outbreaks cause heavy losses each year, and one of the most predominant viral diseases is infectious pancreatic necrosis (IPN). The virus causing this disease, the infectious pancreatic necrosis virus (IPNV), belongs to the Birnaviridae family of viruses with a double-stranded RNA (dsRNA) genome. Although viral disease is prevalent in the Atlantic salmon aquaculture industry, fish possess an immune system fully equipped to handle viral disease. In this work we have studied induction of the type I interferon (IFN) response in Atlantic salmon in response to intracellular foreign RNA. IFNs are pivotal alarm proteins alerting other cells of the infection, contributing to the establishment of an antiviral state. In order for IFNs to be produced, the cell must recognize the presence of the viral intruder. Viruses are recognized by a wide range of different receptors. The receptors recognize characteristic pathogen associated molecular patterns (PAMPs), for viruses usually the nucleic acids. The receptors proceed to signal through a conserved signaling pathway that culminates in the induction of IFN production. We have identified a central member of the signaling pathway, IPS-1, a signal mediator conserved through evolution. We have also investigated the promoter elements of two type I IFNa promoters, characterizing the regulatory regions. The induction of IFN production is a common target for viral proteins trying to subvert the IFN response and subsequent antiviral state. Using the IFN promoters and IPS-1 protein, we identified IFN antagonistic effects of separate IPNV proteins.