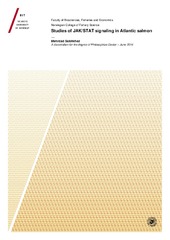 In mammals the JAK-STAT pathway plays a significant role in mediating the biological activities of both type I and type II IFN, where JAKs are receptor associated kinases and STATs the transcription factors they activate. At the start of this project the knowledge of the JAK-STAT pathway in fish in general was scarce and there were few reports describing the function of any JAK-STAT family member in the Atlantic salmon. There was also very limited knowledge about molecules involved in regulation of this signaling pathway in fish. In this project period we have cloned and / or initiated studies of the functional activity of the transcription factors STAT1, STAT2 and IRF9 and also the TYK2 kinase, as well as several members of the suppressors of cytokine signaling (SOCS) family derived from salmon.