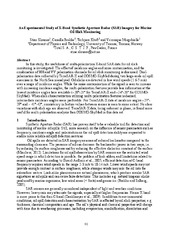 The focus of this thesis is the application of multipolarization SAR data for characterization of marine oil spills and other low backscatter ocean phenomena. A variety of SAR descriptors are investigated for the purpose of discriminating between oil spills and look-alikes. The effects of various parameters on the imaging, including sensor frequency, imaging geometry and oil properties, are addressed. The analysis is performed on a unique data set collected during annual oil spill exercises in the North Sea. Cross-polarization channels are found to be severely contaminated by noise, and only copolarization channels are used in this study. Coherent systems, in which the relative phase between polarization channels is preserved, are found preferable to sensors where only intensity information is useful. A number of dual-copolarization features are compared in terms of their discrimination ability. The two most promising features are selected and used as basis for image classification. The results show that the feature pair can distinguish between a simulated biogenic slick and mineral oil spills. A comparison between C- and X-band data is conducted, including analysis of near coincident acquisitions by Radarsat-2 (C-band) and TerraSAR-X (X-band). Multipolarization features here show enhanced detection and characterization abilities in the Radarsat-2 data compared to TerraSAR-X data. No clear difference in terms of data quality is found. The presence of a non-Bragg scattering component in the data is revealed for both sensors. Some differences in the statistical and scattering properties are identified between the two sensors and among low backscatter regions of various origins. A potential for using log-cumulants for discrimination between mineral oil spills and other marine low backscatter regions are demonstrated. This is shown for both Radarsat-2 and TerraSAR-X, and for both single-polarization and multipolarization data. The proposed method has a potential for classification of low backscatter ocean regions of unknown origin.