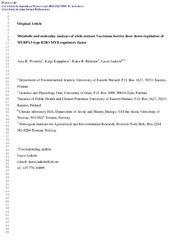 Berries of the genus Vaccinium are among the best natural sources of flavonoids. In this study, the expression of structural and regulatory flavonoid biosynthetic genes and the accumulation of flavonoids in white mutant and blue-colored wild-type bog bilberry (V. uliginosum) fruits were measured at different stages of berry development. In contrast to high contents of anthocyanins in ripe blue-colored berries, only traces were detected by HPLC-ESI-MS in ripe white mutant berries. However, similar profile and high levels of flavonol glycosides and proanthocyanidins were quantified in both ripe white and ripe wild-type berries. Analysis with qRT-PCR showed strong down-regulation of structural genes chalcone synthase (VuCHS), dihydroflavonol 4-reductase (VuDFR) and anthocyanidin synthase (VuANS) as well as MYBPA1-type transcription factor VuMYBPA1 in white berries during ripening compared to wild-type berries. The profiles of transcript accumulation of chalcone isomerase (VuCHI), anthocyanidin reductase (VuANR), leucoanthocyanidin reductase (VuLAR) and flavonoid 3′5′ hydroxylase (VuF3′5′H) were more similar between the white and the wild-type berries during fruit development, while expression of UDP-glucose: flavonoid 3-O-glucosyltransferase (VuUFGT) showed similar trend but fourfold lower level in white mutant. VuMYBPA1, the R2R3 MYB family member, is a homologue of VmMYB2 of V. myrtillus and VcMYBPA1 of V. corymbosum and belongs to MYBPA1- type MYB family which members are shown in some species to be related with proanthocyanidin biosynthesis in fruits. Our results combined with earlier data of the role of VmMYB2 in white mutant berries of V. myrtillus suggest that the regulation of anthocyanin biosynthesis in Vaccinium species could differ from other species studied.