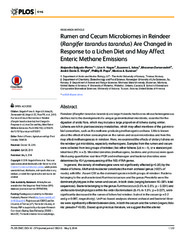 Reindeer (Rangifer tarandus tarandus) are large Holarctic herbivores whose heterogeneous diet has led to the development of a unique gastrointestinal microbiota, essential for the digestion of arctic flora, which may include a large proportion of lichens during winter. Lichens are rich in plant secondary metabolites, which may affect members of the gut microbial consortium, such as the methane-producing methanogenic archaea. Little is known about the effect of lichen consumption on the rumen and cecum microbiotas and how this may affect methanogenesis in reindeer. Here, we examined the effects of dietary lichens on the reindeer gut microbiota, especially methanogens. Samples from the rumen and cecum were collected from two groups of reindeer, fed either lichens (Ld: n = 4), or a standard pelleted feed (Pd: n = 3). Microbial densities (methanogens, bacteria and protozoa) were quantified using quantitative real-time PCR and methanogen and bacterial diversities were determined by 454 pyrosequencing of the 16S rRNA genes.
In general, the density of methanogens were not significantly affected (p>0.05) by the intake of lichens. Methanobrevibacter constituted the main archaeal genus (>95% of reads), with Mbr. thaueri CW as the dominant species in both groups of reindeer. Bacteria belonging to the uncharacterized Ruminococcaceae and the genus Prevotella were the dominant phylotypes in the rumen and cecum, in both diets (ranging between 16–38% total sequences). Bacteria belonging to the genus Ruminococcus (3.5% to 0.6%; p = 0.001) and uncharacterized phylotypes within the order Bacteroidales (8.4% to 1.3%; p = 0.027), were significantly decreased in the rumen of lichen-fed reindeer, but not in the cecum (p = 0.2 and p = 0.087, respectively). UniFrac-based analyses showed archaeal and bacterial libraries were significantly different between diets, in both the cecum and the rumen (vegan::Adonis: pseudo-F<0.05). Based upon previous literature, we suggest that the altered methanogen and bacterial profiles may account for expected lower methane emissions from lichen-fed reindeer.