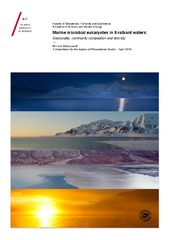 There is an increasing awareness of the importance and diversity of the microbial community in Arctic regions, but their role in the ecosystem is still largely unknown. Sampling was conducted in Svalbard waters with focus on the Adventfjorden-Isfjorden time series station (IsA, West Spitsbergen) that was sampled frequently from December 2011 to December 2012. The community composition of microbial eukaryotes (size: 0.45-10 µm and > 10µm) and their contribution to the vertical particle flux were determined using PCR screening and 454 sequencing of the 18S V4 region amplified from both DNA and RNA. The autotrophs Micromonas pusilla and Phaeocystis pouchetii were widely distributed and active at almost all locations and depths around Svalbard during the polar night and played important roles during the spring bloom at IsA. Small Gyrodinium species were predominant throughout the year. The winter and early-spring communities, in which heterotrophs such as Marine Stramenopiles, Picozoa and the parasitoid Marine Alveolates dominated, were more diverse than the spring and summer/autumn communities. An advective event in March was potentially responsible for a change in the community composition of small eukaryotes. Small cells (< 10 µm) contributed significantly to the vertical flux during autumn and winter, possibly due to increased flocculation and ballasting processes. In contrast, larger and more typical spring bloom taxa (e.g. diatoms) dominated both the water column and sediment traps during spring. Molecular tools not only revealed novel taxa contributing to the vertical export, but also suggested new mechanisms for vertical export exemplified by parasite-host induced transport. These results emphasize the extreme seasonality of Arctic microbial eukaryotic communities driven by the environment (e.g. light and nutrient availability) but point to the necessity of a thorough knowledge of hydrography to fully understand their succession and fate.