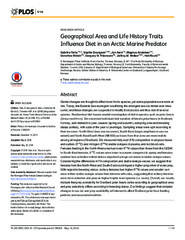 Global changes are thought to affect most Arctic species, yet some populations are more at risk. Today, the Barents Sea ecoregion is suffering the strongest sea ice retreat ever measured; and these changes are suspected to modify food access and thus diet of several species. Biochemical diet tracers enable investigation of diet in species such as polar bears (Ursus maritimus). We examined individual diet variation of female polar bears in Svalbard, Norway, and related it to year, season (spring and autumn), sampling area and breeding status (solitary, with cubs of the year or yearlings). Sampling areas were split according to their ice cover: North-West (less sea ice cover), South-East (larger amplitude in sea ice extent) and North-East/South-West (NESW) as bears from that zone are more mobile among all regions of Svalbard. We measured fatty acid (FA) composition in adipose tissue and carbon (δ13C) and nitrogen (δ15N) stable isotopes in plasma and red blood cells. Females feeding in the North-West area had lower δ15N values than those from the NESW. In South-East females, δ13C values were lower in autumn compared to spring and females seemed less selective in their diet as depicted by large variances in stable isotope values. Considering the differences in FA composition and stable isotope values, we suggest that females from the North-West and South-East could ingest a higher proportion of avian prey. With regard to breeding status, solitary females had higher δ15N values and smaller variance in their stable isotopic values than females with cubs, suggesting that solitary females were more selective and prey on higher trophic level species (i.e. seals). Overall, our results indicate that prey availability for Svalbard polar bears varies according to geographical area and prey selectivity differs according to breeding status. Our findings suggest that complex changes in sea ice and prey availability will interact to affect Svalbard polar bear feeding patterns and associated nutrition.

This is an open access article distributed under the terms of the Creative Commons Attribution License, which permits unrestricted use, distribution, and reproduction in any medium, provided the original author and source are credited.
This article is also available via DOI:10.1371/journal.pone.0155980