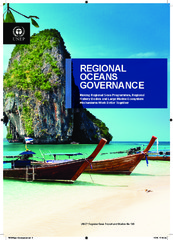 Oceans are of vital importance to the international community, not only for their living and non-living resources and the shipping and other maritime uses they facilitate, but also for the key role they play in the global climate and weather system. The marine environment, its resources, and its biodiversity are increasing threatened by human activities, both maritime and terrestrial. Anthropogenic climate change, seabased and land-based pollution, habitat destruction, introduction of alien species, over-exploitation of non-renewable resources, and destructive fishing practices are among the most serious threats. While each of these threats requires dedicated, separate attention, there is increasingly wide support for more holistic and integrated governance approaches that take account of the spatial dimension and functioning of ecosystems. This paper refers to such approaches as “ecosystem-based management” (EBM).
The following three types of regional oceans governance mechanisms are reviewed in this paper:
(a) Regional Seas programmes, most of which are supported or coordinated by the United Nations Environment Programme (UNEP);
(b) Regional fishery bodies (RFBs), some of which have been established under the framework of the United Nations Food and Agriculture Organization (FAO); and
(c) Large Marine Ecosystem (LME) mechanisms, most of which are projects supported by the Global Environment Facility (GEF).
This review is intended to assist states that participate in existing regional oceans governance mechanisms, as well as those that are considering participating, by clarifying the key distinctions between their mandates, highlighting the successes and challenges of existing mechanisms, and outlining cooperation and coordination efforts. Options are identified for strengthening existing mechanisms and cooperation and coordination between them, as well as for the creation of new regional oceans governance mechanisms, with particular reference to EBM.