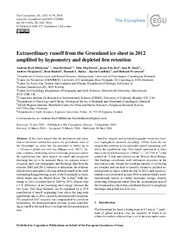 It has been argued that the infiltration and retention of meltwater within firn across the percolation zone of the Greenland ice sheet has the potential to buffer up to  ∼  3.6 mm of global sea-level rise (Harper et al., 2012). Despite evidence confirming active refreezing processes above the equilibrium line, their impact on runoff and proglacial discharge has yet to be assessed. Here, we compare meteorological, melt, firn stratigraphy and discharge data from the extreme 2010 and 2012 summers to determine the relationship between atmospheric forcing and melt runoff at the land-terminating Kangerlussuaq sector of the Greenland ice sheet, which drains into the Watson River. The 6.8 km3 bulk discharge in 2012 exceeded that in 2010 by 28 %, despite only a 3 % difference in net incoming melt energy between the two years. This large disparity can be explained by a 10 % contribution of runoff originating from above the long-term equilibrium line in 2012 caused by diminished firn retention. The amplified 2012 response was compounded by catchment hypsometry; the disproportionate increase in area contributing to runoff as the melt-level rose high into the accumulation area.

Satellite imagery and aerial photographs reveal an extensive supraglacial network extending 140 km from the ice margin that confirms active meltwater runoff originating well above the equilibrium line. This runoff culminated in three days with record discharge of 3100 m3 s−1 (0.27 Gt d−1) that peaked on 11 July and washed out the Watson River Bridge. Our findings corroborate melt infiltration processes in the percolation zone, though the resulting patterns of refreezing are complex and can lead to spatially extensive, perched superimposed ice layers within the firn. In 2012, such layers extended to an elevation of at least 1840 m and provided a semi-impermeable barrier to further meltwater storage, thereby promoting widespread runoff from the accumulation area of the Greenland ice sheet that contributed directly to proglacial discharge and global sea-level rise.