Crosslinguistic influence in the acquisition of a third language: The Linguistic Proximity Model 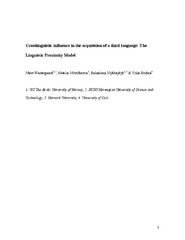 Aims and Objectives:
The main goal of the present study is to investigate effects of crosslinguistic influence in third language acquisition by simultaneous bilinguals. We address the following research questions: Do both languages contribute to crosslinguistic influence in third language acquisition, or is one of them chosen as the sole source of influence? Is crosslinguistic influence always from the typologically more similar language? Is crosslinguistic influence always facilitative, or can it also be non-facilitative?
Methodology:
The paper reports on a grammaticality judgment task with two word order conditions, both related to verb movement (verb-second in Norwegian and subject-auxiliary inversion in English).
Data and Analysis:
An experiment was carried out with three groups of 11-14-year-old participants, Norwegian-Russian bilinguals (n=22), Norwegian-speaking monolinguals (n=46), and Russian-speaking monolinguals (n=31). The data were analyzed using a generalized linear mixed effects logistic regression allowing us to estimate the effects of condition (Adv-V, Aux-S), language (Norwegian, Norwegian-Russian, Russian) and their interaction on the correctness of judgments.
Findings:
The analysis reveals that while L1 Norwegian children over-accept ungrammatical sentences in English with a word order that reflects verb movement (V2), bilingual Norwegian-Russian children notice these errors significantly more often, just like L1 Russians. At the same time, the bilinguals score lower than L1 Russian children on grammatical trials, suggesting the presence of non-facilitative influence from Norwegian.
Originality:
This study argues for the Linguistic Proximity Model, which proposes incremental property-by-property learning and allows for both facilitative and non-facilitative influence from one or both of the previously acquired languages.
Significance:
The Linguistic Proximity Model and supporting experimental data contribute to existing models in third language acquisition by indicating that not just typological proximity but also structural similarity at an abstract level should be considered an important factor in third language acquisition.