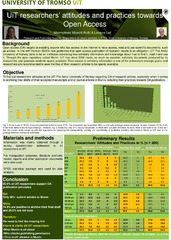 Open access targets at enabling anyone who has access to the internet to have access, read and use scientific documents, such as articles. In line with Horizon 2020’s new guidelines that open access publication of research results is an obligation, UiT The Arctic University of Norway aims to be an institution advancing free scholarly information and knowledge about how to find it, read it and use it. Through the open repository called Munin, UiT has since 2006 made, as much as possible, the scholarly documents produced by its researchers and graduate students openly available. Free access to scholarly information is one of the university's strategic goals, and researchers are recommended to save the files of their research articles to be openly available. The objective of this study is to find out researcher’s attitudes at the UiT The Arctic University of Norway regarding Open Access of research articles. Specifically, the study investigates the researchers’ attitudes, especially when it comes to archiving final drafts of their accepted manuscripts or journal articles in Munin, including their perceptions towards open access publication. Such information was mainly obtained through a survey questionnaire addressed to all researchers at UiT. For triangulation purposes, literature archives, record, reports and other publication documents were also used. SPSS statistical package was used for data analysis. Preliminary results shows that 93% of the researchers at UiT support OA publication principles, but only 46% are currently submitting to the OA university repository, Munin. Researchers indicate that the majority either do not know Munin well (60%) or they do not know it at all (12%). This portrays a need for information and clarification of what Munin is all about and processes for making the produced scholarly documents available openly. Already, 74.5% of the UiT researchers indicate willingness to archive their final draft in Munin. This implies that the output is already there and what is required is to sensitising researchers on why, who and how their research should be published openly in Munin, while making clear to them who’s responsibility it is to check the archiving permission; a point many researchers indicate being ignorant of. There is need to make available, in the Library information-desk, the information about how to publish and access the documents in Munin. In so doing, OA principles are encouraged, but it also acts as a means through which the quality of research is enhanced. And thereby also encouraging and supporting EU Horizon 2020 current projects, where the funding comes with strict rules in order to secure free sharing of research results and open access. As Msomphora (2016) notes, open access allow research results to be transparent, meaning that secrecy should be avoided in order to permit criticism of the knowledge produced. But, more so, it enhances global availability of quality knowledge, even in developing countries, and that taxpayers are able to get value for money. However, certain researchers criticise open access publication because it tends to discriminate against authors who cannot afford the article processing charges. Not everyone have the support of their institution as the UiT researchers have. Therefore, through the current survey and documented literature, this study produces arguments for improving the manageability, visibility and accessibility of scholarly documents in Munin at UiT, and for the growing research community worldwide.