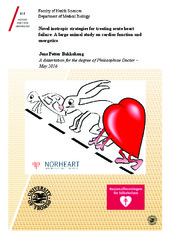 Acute heart failure (AHF) is a disease with a mortality ranging from 5 to 40% depending on severity, despite modern revascularization techniques after acute myocardial thromboembolism. In this thesis we have investigated two new concepts of treating AHF. In paper 1 we investigated the combination of dobutamine and ivabradine (D+I) in a porcine model of stunning AHF. Ivabradine attenuated the chronotropic effect of dobutamine, increased stroke volume (SV) to pre-ischaemic values, with neutral cardiac efficiency (CE). In theory, by increasing diastolic filling time. In paper 2 we evaluated metabolic and haemodynamic effects of the new myosin-activator omecamtiv mecarbil (OM) in a pig- and a mouse-model. We found reduced CE in both healthy and ischaemic pigs, combined with increased ejection fraction without increase in SV. In the mouse model we found that the reduced efficiency could be explained by increased myosinATPase activity. In paper 3 we wanted to compare the effect of D+I and OM on left ventricular diastolic function in severe AHF in pigs. The results showed increased ejection fraction by OM and D+I, but only D+I increased SV. In part explained by severely impaired early diastolic function by OM ( increased Tau, reduced dP/dtmin and reduced ventriculo-atrial pressure difference).