The effect of hypoxaemia on fetal cardiac function 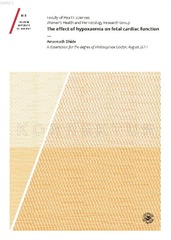 Objectives The objectives were 1. To study the effect of placental embolisation as well as maternal hypoxaemia on fetal left and right ventricular function as reflected by pulsed-wave Doppler-derived myocardial performance index (MPI). 2. To study myocardial systolic and diastolic function of the fetal left and right ventricles using ultrasound speckle tracking technique to measure global strain and strain rate. 3. To examine if fetal administration of Sildenafil can relieve reactive pulmonary vaso-constriction in a hypoxaemic fetus. 4. To assess the effects of Sildenafil on cardiac function. Methods We used pregnant sheep on gestational day 115-129/145 (approximately 4/5th of the length of gestation) for the study. Separate sets of experiments were performed for each component of the study described above. Pregnant sheep were operated under general anaesthesia in order to place measurement equipment in the ewe and the fetus. catheters were placed in fetal carotid artery and jugular vein. An ultrasonic transit-time flow probe was placed around the ductus arteriosus to measure ductal blood flow. Electrodes were placed to obtain fetal ECG. A catheter was kept in the amniotic cavity to measure the amniotic fluid pressure. Experiments were performed after a recovery period of 48-72 hours. Baseline measurements of fetal blood gases and acid-base status were performed. In the first set of the experiments, we studied the effect of both placental embolisation and fetal hypoxaemia (caused by maternal hypo-oxygenation) on fetal global cardiac function using ultrasound. We evaluated global myocardial function with pulse-wave Doppler-based myocardial performance index. Stored fetal myocardial tissue was subjected to hypoxic gene panel using polymerase chain reaction (PCR) to assess expression of hypoxaemic genes. In the second set of experiments we studied the changes in function of the fetal heart in response to hypoxaemia. An angle independent technique for assessing myocardial function (ultrasound speckle tracking) was used for this purpose. The evaluation of strain and strain rate was performed off-line on stored loops of the ultrasound examinations carried out during the experiments. In the third set, fetal cardiac systolic function was evaluated using ventricular outputs, global longitudinal strain/strain rate with speckle tracking echocardiography and isovolumic contraction velocities of the ventricular wall at the level of the mitral and tricuspid valves with tissue Doppler. Diastolic function was evaluated using isovolumic relaxation velocities using tissue Doppler and pulsatility index of the ductus venosus with pulsed wave Doppler ultrasound. Pulmonary blood flow was calculated from the ductus arteriosus flow and left ventricular output. Pulsatility index of the right pulmonary artery was measured with pulsed wave Doppler ultrasound. The measurements were obtained at baseline, with hypoxaemia and at recovery. Animals administered saline or Sildenafil after hypoxemia was induced, and the two groups were used for comparison. Linear mixed model analysis was used to analyse data on repeated measurements taking into account correlation of measurements carried out in an individual fetus at different time-points. Random intercept model was selected. Results Placental vascular resistance and umbilical artery PI increased significantly with placental embolization. During hypoxaemia, mean LV MPI increased significantly only in fetuses with an intact placenta, returning to baseline during the recovery phase. Right ventricular MPI was unaffected. Expression of the hypoxaemic genes was no different with or without placental embolisation. Significantly lower expression of genes involved in cardiac contractile function and its regulation were seen in the group with placental embolisation. Using speckle tracking echocardiography, baseline mean (SD) left and right ventricular global longitudinal strains were -18.7% (3.8) and -14.3% (5.3) respectively (p = 0.003). Hypoxaemia at 30 and 120 minutes led to a significant reduction (less deformation) in the global longitudinal strain of the LV, while the global circumferential and radial strains were not affected by fetal hypoxaemia. During the recovery period, LV global longitudinal strain returned back to baseline level. Right ventricular global longitudinal, circumferential or radial strains did not change significantly. In the third set of experiments, fetal hypoxaemia did not affect RVCO that remained unchanged in both groups. However, LVCO and combined cardiac output fell significantly in both the groups during hypoxaemia and remained significantly lower in recovery phase than at baseline. In both groups, lung volume blood flow decreased and flow across the ductus arteriosus increased significantly during hypoxaemia phases with no difference between the Sildenafil and control groups. During hypoxaemia phases left but not right ventricular global longitudinal deformation was reduced (p = 0.003) in both groups. Both right and left ventricular and isovolumic relaxation velocity (IVRV) decreased significantly during hypoxaemia phases with no apparent effect of Sildenafil. Fetal hypoxaemia led to pulmonary arterial vasoconstriction, decreased lung volume blood flow, increased shunting through the ductus arteriosus, reduced left ventricular cardiac output and was associated with evidence of cardiac dysfunction on echocardiography. Conclusions In near-term sheep fetus, fetal left ventricle is more sensitive to acute hypoxaemia than the right ventricle. LV global longitudinal and circumferential deformations are greater as compared to RV. Acute hypoxaemia leads to LV rather than RV dysfunction as demonstrated by decreased deformation. Direct administration of Sildenafil to hypoxic fetuses did not reverse redistribution of cardiac output or ameliorate hypoxaemia induced cardiac dysfunction.

The paper 3 of this thesis is not available in Munin.