Maternal Anti-HLA Class I Antibodies in Connection with Pregnancy and Neonatal Thrombocytopenia – a Cause for Concern? Clinical Characteristics and Antibody Analysis of Retrospective and Prospective Populations 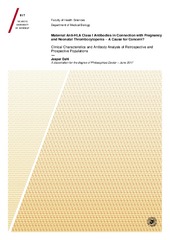 The papers 2 and 3 of this thesis are not available in Munin.