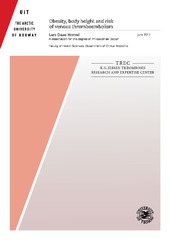 Venous thromboembolism (VTE) is a collective term for deep vein thrombosis (DVT) and pulmonary embolism (PE). Obesity, as well as a tall stature, are well-known and substantial risk factors for VTE, but the underlying mechanisms behind these associations are not fully understood. The aims of this thesis were to investigate how different patterns of body fat distribution, levels of obesity-related cardiovascular risk factors and chronic, low-grade inflammation influenced the risk of venous and arterial thrombosis. Further, we wanted to investigate whether changes in body weight over time was associated with VTE risk. Finally, we sought to explore if the combined presence of a tall stature and genetic pro-thrombotic risk factors yielded synergistic effects on the risk of VTE. The study populations in this thesis were recruited from the third (1986-87) through the sixth (2007-2008) surveys of the Tromsø study, a large population-based cohort. Exposure information was obtained through self-administered questionnaires, blood samples and physical examination. Incident VTE events during follow-up were registered and thoroughly validated. In the first paper, we found that body fat distribution had a differential impact on venous and arterial thrombosis, where subjects with wide hips were at elevated risk of VTE but not MI. Further, cardiometabolic abnormalities such as insulin resistance, hypertension and dyslipidemia did not seem to mediate the increased risk of VTE in obesity as it does for MI. In the second paper, chronic low-grade inflammation assessed by C-reactive protein (CRP) appeared to be a shared pathway for the association between obesity and arterial and venous thrombosis, at least in women. However, the strengths of association were much weaker for VTE than for MI. In the third paper, we showed that changes in body weight are associated with VTE risk independent of baseline body mass index (BMI). Subjects who gained more than 7.5 kgs between two surveys of the Tromsø study were at a 1.6-fold increased risk of VTE in the years that followed compared to those who maintained a stable weight. Among subjects with a BMI ≥30 kg/m2, those who gained most weight were at almost a four-fold increased risk. Finally, in the fourth paper, we confirmed previous findings of an increased risk of VTE among subjects with a tall stature, where subjects above >80th percentile in body height were at a 2-fold increased risk of VTE. Likewise, the presence of prothrombotic genotypes was associated with VTE risk. However, in contrast to obesity, the combination of a tall stature and prothrombotic genotypes did not yield excess risk of VTE.