Frequency of visits and examinations in the Public Dental Service in Finland - a retrospective analysis, 2001-2013 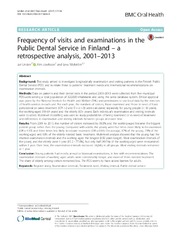 Background:
This study aimed to investigate longitudinally examination and visiting patterns in the Finnish Public Dental Service (PDS) and to relate these to patients’ treatment needs and international recommendations on examination intervals.
Methods:
Data on patients and their dental visits in the period 2001–2013 were collected from five municipal PDS-units serving a total population of 320,000 inhabitants and using the same database system. Ethical approval was given by the National Institute for Health and Welfare (THL) and permissions to use local data by the directors of health services in each unit. For each year, the numbers of visitors, those examined and those in need of basic periodontal or caries treatment (CPI >2 and D + d > 0) were calculated separately for young people (< 18 years), the working-aged (18–64 years) and the elderly (65+ years). Each individual’s examination and visiting intervals were counted. Multilevel modelling was used to study probabilities of being examined or in need of treatment and differences in examination and visiting intervals between groups and over time.
Results:
From 2001 to 2013, the number of visitors increased by 39.3% and the working-aged became the biggest patient group rather than the young. Compared with adults, the young were five times more likely to be examined (OR = 4.97) and three times less likely to require treatment (OR = 0.31). On average, 37% of the young, 73% of the working-aged and 63% of the elderly needed basic treatment. Multi-level analysis showed that the young had the shortest examination intervals and the working aged the longest (0.50 years longer). Most examination intervals of the young and the elderly were 1 year (65.2 - 77.0%), but only half (49.5%) of the working-aged were re-examined within 1 year. Over time, the examination intervals increased slightly in all groups. Most visiting intervals remained at 1 year.
Conclusion:
Young patients had mostly annual or biannual examinations, in line with recommendations. The examination intervals of working aged adults were considerably longer, and more of them needed treatment. The share of elderly among visitors remained low. The PDS seems to have access barriers for adults.