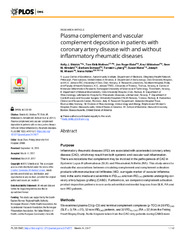 Purpose:
Inflammatory rheumatic diseases (IRD) are associated with accelerated coronary artery disease (CAD), which may result from both systemic and vascular wall inflammation. There are indications that complement may be involved in the pathogenesis of CAD in Systemic Lupus Erythematosus (SLE) and Rheumatoid Arthritis (RA). This study aimed to evaluate the associations between circulating complement and complement activation products with mononuclear cell infiltrates (MCI, surrogate marker of vascular inflammation) in the aortic media and adventitia in IRDCAD and non-IRDCAD patients undergoing coronary artery bypass grafting (CABG). Furthermore, we compared complement activation product deposition patterns in rare aorta adventitial and medial biopsies from SLE, RA and non-IRD patients.
Methods:
We examined plasma C3 (p-C3) and terminal complement complexes (p-TCC) in 28 IRDCAD (SLE = 3; RA = 25), 52 non-IRDCAD patients, and 32 IRDNo CAD (RA = 32) from the Feiring Heart Biopsy Study. Aortic biopsies taken from the CAD only patients during CABG were previously evaluated for adventitial MCIs. The rare aortic biopsies from 3 SLE, 3 RA and 3 non-IRDCAD were assessed for the presence of C3 and C3d using immunohistochemistry.
Results:
IRDCAD patients had higher p-TCC than non-IRDCAD or IRDNo CAD patients (p<0.0001), but a similar p-C3 level (p = 0.42). Circulating C3 was associated with IRD duration (ρ, p-value: 0.46, 0.03). In multiple logistic regression analysis, IRD remained significantly related to the presence and size of MCI (p<0.05). C3 was present in all tissue samples. C3d was detected in the media of all patients and only in the adventitia of IRD patients (diffuse in all SLE and focal in one RA).
Conclusion:
The independent association of IRD status with MCI and the observed C3d deposition supports the unique relationship between rheumatic disease, and, in particular, SLE with the complement system. Exaggerated systemic and vascular complement activation may accelerate CVD, serve as a CVD biomarker, and represent a target for new therapies.