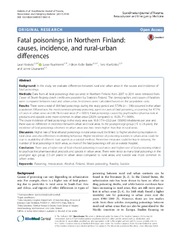 Background: In this study we evaluate differences between rural and urban areas in the causes and incidence of fatal poisonings.

Methods: Data from all fatal poisonings that occurred in Northern Finland from 2007 to 2011 were retrieved from Cause of Death Registry death certificates provided by Statistics Finland. The demographics and causes of fatalities were compared between rural and urban areas. Incidences were calculated based on the population data.