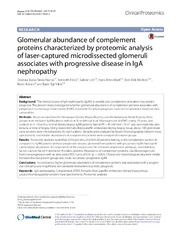 Background: The clinical course of IgA nephropathy (IgAN) is variable and complement activation may predict prognosis. The present study investigated whether glomerular abundance of complement proteins associates with progression to end-stage renal disease (ESRD) in patients for whom prognosis could not be predicted based on clinical variables.

Methods: Based on data from the Norwegian Kidney Biopsy Registry and the Norwegian Renal Registry, three groups were included: IgAN patients with (n = 9) or without (n = 16) progression to ESRD during 10 years, and controls (n = 15) with a normal kidney biopsy. IgAN patients had eGFR > 45 ml/min/1.73 m2 and non-nephrotic proteinuria at time of biopsy. Using stored formalin-fixed paraffin embedded kidney biopsy tissue, about 100 glomerular cross sections were microdissected for each patient. Samples were analyzed by liquid chromatography–tandem mass spectrometry and relative abundances of complement proteins were compared between groups.

Results: Proteomic analyses quantified 2018 proteins, of which 28 proteins belong to the complement system. As compared to IgAN patients without progressive disease, glomeruli from patients with progressive IgAN had significantly higher abundance of components of the classical and the terminal complement pathways, and inhibitory factors such as Factor H and factor H related proteins. Abundance of complement proteins classified progressors from non-progressors with an area under ROC curve of 0.91 (p = 0.001). Clinical and morphological data were similar between the two patient groups and could not predict progressive IgAN.

Conclusions: In conclusion, higher glomerular abundance of complement proteins was associated with a progressive clinical course in IgAN and are candidate biomarkers to predict prognosis.