The Impact of Economic Reforms on the Maasai Pastoralists of Tanzania: The Case of Migrant Youths 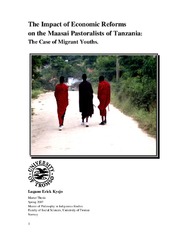 Since the mid 1980s, Tanzania has adopted the structural adjustment programs 9SAPs) that are sponsored by the World bank and the International Monetary Fund to improve upon its economic performance. In Tanzania, structural adjustment programs have focused on institutional reforms known as privatisation, cutting of government expenditure in various economic and social sectors, and to boost exports.

More than 80 percent of the people live in rural areas, depending on land and other natural resources for their livelihoods. This makes agriculture the most important economic sector in Tanzania, accounting for about half of the GDP and providing the major source of income for about 80 percent of the population. The agricultural system is mostly peasant based or production by householders for self consumption and, at times for sale. Reforms in the agricultural sector and its components, such as livestock herding, crop farming, land and land tenure, has had far reaching effects on livelihoods of these rural households and other Tanzanians. The impact of the new policies is mostly seen on the changes in livelihoods, health, and education and housing sectors.

The Maasai of Tanzania are among the major pastoral societies of Africa. They are expert herdsmen, with their traditional homeland located in northern Tanzania. The economy liberalisation policies have led to profit driven tourism, farming and mining by large companies in the Maasai areas. The pressures on lands otherwise used by pastoralists have resulted in a reduced capacity of rangelands. An outcome of these pressures on Maasai lands and their traditional livelihoods source has been the outward migration of Maasai youths to urban centres for new forms of livelihood.

With a focus on migrant Maasai youths in Dar es Salaam, the commercial capital of Tanzania. This study found out that these migrant youths mostly earn a living in the informal sector. The specific income generating activities were the sale of herbal medicine, doing Maasai hair style plaiting and working as security guards. While these activities provided a form of “life” in Dar es Salaam for these migrant youths, they were also platforms for exhibiting the distinctiveness of Maasai culture in the complexity of urban life.