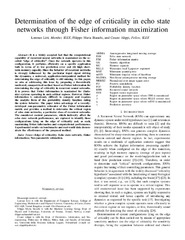 It is a widely accepted fact that the computational capability of recurrent neural networks (RNNs) is maximized on the so-called “edge of criticality.” Once the network operates in this configuration, it performs efficiently on a specific application both in terms of: 1) low prediction error and 2) high shortterm memory capacity. Since the behavior of recurrent networks is strongly influenced by the particular input signal driving the dynamics, a universal, application-independent method for determining the edge of criticality is still missing. In this paper, we aim at addressing this issue by proposing a theoretically motivated, unsupervised method based on Fisher information for determining the edge of criticality in RNNs. It is proved that Fisher information is maximized for (finite-size) systems operating in such critical regions. However, Fisher information is notoriously difficult to compute and requires the analytic form of the probability density function ruling the system behavior. This paper takes advantage of a recently developed nonparametric estimator of the Fisher information matrix and provides a method to determine the critical region of echo state networks (ESNs), a particular class of recurrent networks. The considered control parameters, which indirectly affect the ESN performance, are explored to identify those configurations lying on the edge of criticality and, as such, maximizing Fisher information and computational performance. Experimental results on benchmarks and real-world data demonstrate the effectiveness of the proposed method.

© 2017 IEEE. Personal use of this material is permitted. Permission from IEEE must be obtained for all other uses, in any current or future media, including reprinting/republishing this material for advertising or promotional purposes, creating new collective works, for resale or redistribution to servers or lists, or reuse of any copyrighted component of this work in other works.