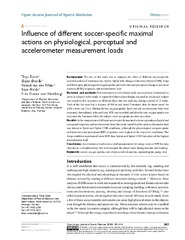 Background: The aim of this study was to compare the effect of different soccer-specific maximal actions (Continuous run, Sprint, Sprint with change of direction [Sprint COD], Jump and Shot) upon physiological (oxygen uptake and heart rate) and perceptual (rating of perceived exertion [RPE]) responses and accelerometer load.

Materials and methods: Ten moderately to well-trained male soccer players volunteered to serve as subjects in this study. A repeated within-subject design was used in which each subject was tested on five occasions on different days, one test each day, during a period of 2 weeks. Each of the five tests had a distance of 900 m and lasted 5 minutes, thus the mean speed for all five tests was 3 m/s. During the test, oxygen uptake, heart rate and accelerometer load were measured. Immediately after each test, RPE was recorded, and after the test, oxygen uptake was measured for 5 minutes while the subject sat in an upright position on a chair.

Conclusion: Accelerometer load is not a valid measurement for energy costs or RPE but may function as a complementary tool to investigate the player loads during matches and training.