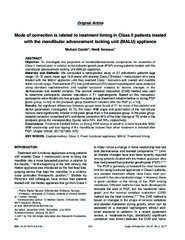 Objective: To investigate the proportion of skeletal/dentoalveolar components for correction of Class II malocclusion in relation to the pubertal growth peak (PGP) among patients treated with the mandibular advancement locking unit (MALU) appliance.

Materials and Methods: We conducted a retrospective study of 27 orthodontic patients (age range: 12–18 years; mean age 14.9 years) with skeletal Class II Division 1 malocclusion who were treated with the MALU appliance until they reached Class I occlusion with overjet and overbite within normal range. Pretreatment (T1) and posttreatment (T2) lateral cephalograms were analyzed using standard cephalometrics and sagittal occlusion analysis to assess changes in the dentoalveolar and skeletal complex. The cervical vertebral maturation (CVM) method was used to determine participants' skeletal maturation in T1 cephalograms. Based on this maturation, participants were divided into two groups: the peak group (treatment initiation before or during PGP [peak group, n=15]) or the postpeak group (treatment initiation after the PGP [n = 12]).

Results: No significant differences between groups were found at T1 for most of the skeletal and dental parameters investigated. At T2, the mean ANB angle and proclination of the mandibular incisors were significantly smaller in the peak group than in the postpeak group. In the peak group, skeletal correction comprised 54% and dental correction 46% of the total change at T2, while in the postpeak group the corresponding figures were 24% and 76%, respectively.

Conclusions: Treatment initiated before or during PGP seems to result in a more favorable SNA/SNB relationship and less tipping of the mandibular incisors than when treatment is initiated after PGP.