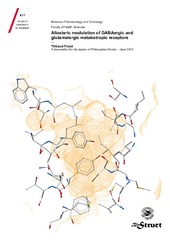 G-protein coupled receptors (GPCRs) are targets for 1/3 of the drugs available on the market making research on this class of proteins a very hot topic in the field of drug discovery. γ-amino butyric acid (GABA) and glutamate are respectively the main inhibitory and the main excitatory neurotransmitters in the mammalian central nervous system (CNS). The GABAB receptor (GABAB-R) and the metabotropic glutamate receptors 1-8 (mGlu1-8-Rs) belong to family C GPCRs and are functional dimers. They are potential drugs targets for the treatments of CNS disorders among others. GABAB-R is also involved in drug and alcohol addictions. The actual therapeutic treatments for CNS diseases come with serious side-effects due to off-target binding. Allosteric modulators (AMs) might hold the opportunity to design more selective drugs with less unwanted effects as the allosteric binding sites are less conserved than orthosteric binding sites. An allosteric binding site has been identified in GABAB-R and mGlu-Rs. The 3D structure of the GABAB- R is unknown while experimental structures of the mGlu1-R and mGlu5-R are available. Though, the activation mechanism of these receptors remains unclear to this date. In the first part of the present study, using the computational technique of homology modelling, several spatial conformations of the subunit GABAB2 were predicted. These theoretical 3D models were used to map the residues of the putative allosteric pocket of GABAB-R. They were also employed in a ligand- and structure-based virtual ligand screening to retrieve potential AMs for the GABAB-R within a database of 8 million commercial compounds. 55 compounds were bought and the experimental testing confirmed that 8 of the identified compounds act as allosteric modulators for the GABAB-R. In the last part of this study, the experimental structure of mGlu1-R was employed as a model to investigate the activity mechanism of several AMs. Using the computational technique of non-biased molecular dynamics (MD) simulation, several partially overlapping binding pockets were identified. The role of water molecules was also demonstrated to be critical for the protein-ligand interactions and activation. One of the AMs with agonist activity induced the opening of a water channel extended from the cytosol up to a region proposed to be important for activation. These results are in lines with other studies performed on GPCR family A members. The presentation of the first AMs discovered via in silico efforts and the allosteric pocket for the GABAB-R will be of big help for future drug discovery campaigns. The results of the MD simulations might help to find a general mechanism of activation for the GPCRs.