Triggering mechanisms in the molecular pathogenesis of FXTAS 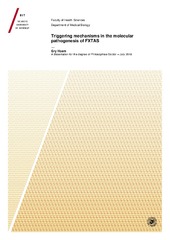 This study focuses on the triggering mechanisms leading to development of the neurodegenerative disorder Fragile X-associated tremor/ataxia syndrome (FXTAS). FXTAS affects carriers of a “premutation” in the Fragile X Mental Retardation 1 (FMR1) gene on the X chromosome. A premutation in this context, means the presence of 55-200 CGG repeats in the 5’untranslated region of the gene. Unaffected individuals in the normal population generally have < 45 CGG repeats. The long CGG repeat tract results in expanded mRNA which forms stable hairpin structures. In addition, premutation carriers have 2-8 fold elevated levels of this expanded FMR1 mRNA. The presence of the CGG-containing mRNA in intranuclear inclusions found in brain tissue from FXTAS patients, has led to the hypothesis that the expanded mRNA itself triggers development of FXTAS. Both the number of CGGs in each mRNA molecule and the concentration of this mRNA are increased in FXTAS patients. It was not known which factor lead to downstream adverse effects. In the first part of our study, we therefore established a novel cellular model system for FXTAS, in which we could vary the mRNA levels for a range of CGG repeat sizes. Using cell death and changes in morphology as outcome measurements, we found toxicity only upon expression of > 62 CGG repeats, even when mRNA concentrations were 100-fold above endogenous levels. We conclude that there is a threshold for CGG repeat number, below which no cellular dysregulation is observed. Later publications in the field have revealed that repeat-associated non-AUG (RAN) translation across the expanded CGG repeat tract causes formation of a toxic protein named FMRpolyG. However, whether FMRpolyG’s negative effects on cellular homeostasis depended on the presence of the CGG mRNA hairpin, was uncertain. In the second part of this study we used a cell-based model allowing expression of the FMRpolyG protein, without the CGG mRNA hairpin. We found that FMRpolyG, in the absence of a CGG repeat hairpin, causes aggregate formation, reduced viability and morphological abnormalities in cells. Our results indicate that FMRpolyG itself may trigger development of FXTAS. Future studies looking at endogenous FMRpolyG expression, and its levels in FXTAS patients versus unaffected controls, are needed to determine the exact role of this protein in disease development.