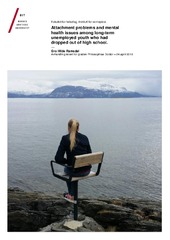 Findings: In the aftermath of school dropout, unemployed youths focused their experiences of abandonment, lack of adult involvement, loneliness and problems in connecting with peers, when describing their dropout processes. They also described experiences of academic failure and amotivation (study 1). The narrative review found that many studies tested associations between potential mediators and parent-child attachment or academic achievement (study 2). However, only two longitudinal studies actually tested for statistical mediation effects. Although they gave some support to all the four mediation hypotheses, a complex interaction of socio-emotional processes and academic performance seems to offer the best explanations of school dropout. Study 3 found that participants who had dropped out described more frequent and more serious symptoms of mental health problems and less social support than did same-aged college students.