Antimicrobial resistance in wildlife – potential for dissemination: Opinion of the Panel on Microbial Ecology of the Norwegian Scientific Committee for Food and Environment 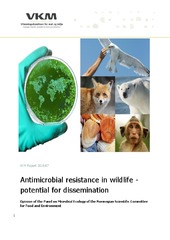 Antimicrobial resistance (AMR) is recognised as one of the greatest public health concerns of our time. The development of AMR occurs in nature as a defence by microbes against naturally occurring antimicrobials. However, the selective pressure, generated by the use of antimicrobial agents in human and veterinary medicine, livestock and plant production as well as aquaculture practices, is the major driving force leading to the increased emergence and spread of resistance in bacteria. The sharing of common habitats and water resources could result in transfer of antimicrobial-resistant bacteria (ARB) between wildlife, foodproducing animals and humans. Bacterial populations with various transferable AMR traits are reported in wildlife, and wildlife is thus a well-established source of AMR bacteria entering the food chain both in meat and in foods of plant origin. The relative importance of such reservoirs and transfer routes of AMR in comparison to other sources leading to AMR development in pathogenic bacteria remains unclear.

VKM appointed a working group, consisting of one member of the Panel on Microbial Ecology, one member of the Panel on Genetically Modified Organisms, one external member, and VKM staff to prepare a draft Opinion. The Panel on Microbial Ecology has reviewed and revised the draft prepared by the working group and approved the Opinion document. In this opinion, we summarise the majority of research conducted on AMR in wildlife, identify knowledge gaps and areas of uncertainty, and explore the interfaces between wildlife, domestic animals, and humans in the context of resistance emergence, persistence, and transmission.