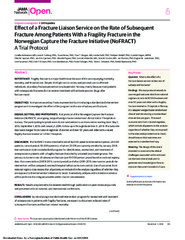 Importance: Fragility fracture is a major health issue because of the accompanying morbidity, mortality, and financial cost. Despite the high cost to society and personal cost to affected individuals, secondary fracture prevention is suboptimal in Norway, mainly because most patients with osteoporotic fractures do not receive treatment with antiosteoporotic drugs after fracture repair.

Objectives: To improve secondary fracture prevention by introducing a standardized intervention program and to investigate the effect of the program on the rate of subsequent fractures.

Design, Setting, and Participants: Trial protocol of the Norwegian Capture the Fracture Initiative (NoFRACT), an ongoing, stepped wedge cluster randomized clinical trial in 7 hospitals in Norway. The participating hospitals were cluster randomized to an intervention starting date: May 1, 2015; September 1, 2015; and January 1, 2016. Follow-up is through December 31, 2019. The outcome data were merged from national registries of women and men 50 years and older with a recent fragility fracture treated at 1 of the 7 hospitals.

Discussion: The NoFRACT trial is intended to enroll 82 000 patients (intervention period, 26 000 patients; control period, 56 000 patients), of whom 23 578 are currently enrolled by January 2018. Interventions include a standardized program for identification, assessment, and treatment of osteoporosis in patients with a fragility fracture that is led by a trained coordinating nurse. The primary outcome is rate of subsequent fracture (per 10 000 person-years) based on national registry data. Outcomes before (2008-2015; control period) and after (2015-2019; intervention period) the intervention will be compared, and each hospital will act as its own control. Use of outcomes from national registry data means that all patients are included in the analysis regardless of whether they are exposed to the intervention (intention to treat). A sensitivity analysis with a transition window will be performed to mitigate possible within-cluster contamination.

Results: Results are planned to be disseminated through publications in peer-reviewed journals and presented at local, national, and international conferences.

Conclusions: By introducing a standardized intervention program for assessment and treatment of osteoporosis in patients with fragility fractures, we expect to document reduced rates of subsequent fractures and fracture-related mortality.