Lower attendance rates in BreastScreen Norway among immigrants across all levels of socio-demographic factors: a population-based study 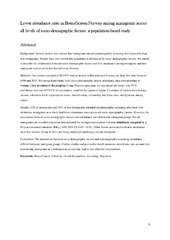 Methods: Our cohort consisted of 885,979 women invited to BreastScreen Norway for their first time between 1996 and 2015. We merged individual-level socio-demographic data to attendance data corresponding to women’s first invitation to the program. Using Poisson regression, we calculated rate ratios with 95% confidence intervals (95% CI) for attendance, stratified by region of origin. Covariates of interest included age, income, education level, employment status, marital status, citizenship and years since immigration, among others.

Results: Fifty-three percent of immigrants and 76% of non-immigrants attended mammographic screening after their first invitation; immigrants as a whole had lower attendance rates across all socio-demographic factors. However, the association between socio-demographic factors and attendance varied between immigrant groups. For all immigrants, no recorded education demonstrated the strongest association with non-attendance compared with ≤ 10 years recorded education (RRadj: 0.69, 95% CI: 0.67–0.71). Other factors associated with non-attendance were low income, living in Oslo, not being employed and being a recent immigrant.

Conclusion: The association between socio-demographic factors and mammographic screening attendance differed between immigrant groups. Further studies and preventive health measures should take into account that considering immigrants as a homogeneous group may lead to less effective interventions.