Group 1 ITI Consensus Report: The influence of implant length and design and medications on clinical and patient-reported outcomes 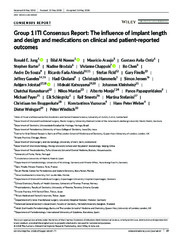 Materials and methods: Four systematic reviews were prepared in advance of the Consensus Conference and were discussed among the participants of Group 1. Consensus statements, clinical recommendations, and recommendations for future research were based on structured group discussions until consensus was reached among the entire expert Group 1. The statements were then presented and accepted following further discussion and modifications as required by the plenary.

Tapered versus non‐tapered implants demonstrated only insignificant differences regarding clinical, radiographic, and patient‐reported outcomes. The intake of certain selective serotonin reuptake inhibitors and proton pump inhibitors is associated with a statistically significant increased implant failure rate. The intake of bisphosphonates related to the treatment of osteoporosis was not associated with an increased implant failure rate.

The following article: Jung, R.E., Al-Nawas, B., Araujo, M., Avila-Ortiz, G., Barter, S., Brodala, N., ... Windisch, P. (2018). Group 1 ITI Consensus Report: The influence of implant length and design and medications on clinical and patient-reported outcomes. Clinical Oral Implants Research, 29(S16), 69-77, can be accessed at https://doi.org/10.1111/clr.13342. This article may be used for non-commercial purposes in accordance with Wiley Terms and Conditions for Use of Self-Archived Versions.