Stability of orthodontic treatment outcomes after 1-year treatment with the eruption guidance appliance in the early mixed dentition: A follow-up study 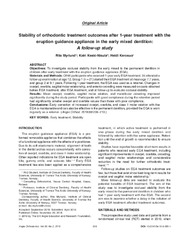 Objectives: To investigate occlusal stability from the early mixed to the permanent dentition in children after early treatment with the eruption guidance appliance (EGA).

Materials and Methods: Of 46 participants who received 1-year early EGA treatment, 35 attended a follow-up examination at age 12. Group 1 (n = 21) started their EGA treatment at mean age 7.7 years, and group 2 at 9.1 years. Following 1-year treatment, the EGA was used as a retainer. Changes in overjet, overbite, sagittal molar relationship, and anterior crowding were measured on casts obtained before EGA treatment, after EGA treatment, and at follow-up to evaluate occlusal stability.

Results: Mean overjet, overbite, sagittal molar relation, and mandibular crowding improved significantly during the study period. Participants with good compliance during the retention period had significantly smaller overjet and overbite values than those with poor compliance.

Conclusions: Early correction of increased overjet, overbite, and class II molar relation with the EGA is maintainable and can also be effective in the permanent dentition, provided the EGA is worn regularly as a retainer.