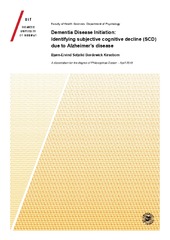 Background: Alzheimer’s disease (AD) may develop 10-15 years before onset of mild cognitive impairment (MCI). Early intervention may serve to halt or delay disease progression. Thus, there is a need to investigate early cognitive and biological markers to detect and track disease progression. Subjective cognitive decline (SCD) is an established risk-factor for AD. However, SCD is a common phenomenon in healthy aging, and most cases are benign. Thus, improved methods of identifying and tracking SCD due to AD are needed. Objectives/aims: This thesis investigates the role of SCD as a preclinical stage of AD and seeks to improve methods of early detection. In paper I, potential recruitment source biases in demographics and cognitive performance between memory-clinic referred and self-referred SCD and MCI cases were investigated. In paper II, the cerebrospinal fluid (CSF) Neurogranin/BACE1 ratio was explored as a biomarker of putatively AD-coupled synapse affection in SCD and MCI cases with amyloid plaques. In paper III, more sensitive and culturally adapted test norms for the Consortium to Establish a Registry for Alzheimer’s Disease (CERAD) word list episodic memory test (WLT) was developed. Methods: Participants were primarily drawn from the Norwegian “Dementia Disease Initiation (DDI)” study comprising 658 baseline and 428 follow-up participants. An additional 59 healthy controls were included from the Norwegian “Trønderbrain” study for the purpose of developing cognitive test norms. Results and conclusions: In paper I, we found that both the SCD and MCI groups, regardless of recruitment method, showed reduced cognitive performance compared to controls. Differences in cognitive impairment for memory clinic-referrals compared to self-referrals were found only within the MCI group. In this study, a need to establish new test norms for the episodic memory test, CERAD WLT was revealed, which were ultimately developed in paper III. The CSF Neurogranin/BACE1 ratio was increased in SCD and MCI cases with amyloid plaques. Increased ratios were related to reductions in hippocampal and amygdala volumes, corresponding to cognitive impairment at baseline and decline at 2-year follow-up. The Neurogranin/BACE1 ratio holds promise as a preclinical AD marker of synapse loss.