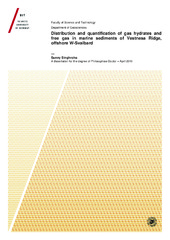 Gas hydrates store a large amount of methane (>500 Gt of Carbon) in continental margins and permafrost environments. Some of these deposits occur in climate sensitive areas, such as Arctic and permafrost settings. Gas hydrates occur extensively in the Vestnesa Ridge, a contourite drift deposit on the western Svalbard margin. The eastern segment of the Vestnesa Ridge is characterized by the presence of active seepages of gas (primarily methane) from pockmarks at the seafloor. In this thesis, I study the distribution of gas hydrates in marine sediments of the eastern segment of the Vestnesa Ridge. I developed a novel technique that estimates the seismic quality factor Q from broad-bandwidth (20-300 HZ) high-resolution P-Cable 3D seismic data in order to directly detect gas hydrates. Furthermore, this study includes a detailed analysis of P- and S-wave seismic velocities (through travel time and full waveform inversion) and azimuthal velocity analysis using ocean-bottom seismic data. P- and S-wave velocity models are used to estimate gas hydrate saturation using the SCA/DEM rock physics model. The combined analysis of these results suggest the occurrence of gas hydrates in fractures and faults, variations in gas hydrate saturation and morphology across faults indicating a strong structural control on the Vestnesa Ridge gas hydrate system.