Differences in emotional and pain-related language in tweets about dentists and medical doctors: Text-analysis of Twitter content 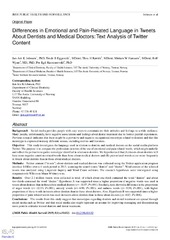 Background - Social media provides people with easy ways to communicate their attitudes and feelings to a wide audience. Many people, unfortunately, have negative associations and feelings about dental treatment due to former painful experiences. Previous research indicates that there might be a pervasive and negative occupational stereotype related to dentists and that this stereotype is expressed in many different venues, including movies and literature.