Estrogenic modulation of socio-sexual and fear-related behaviors in female rats: Properties of the estrogen receptors α and β in a procedure with external validity 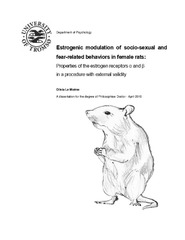 A number of psychiatric troubles are distributed along a biased sex ratio. Differences in sex steroids levels, notably estradiol, could account for this bias. Differential expression and activation of the two known estrogen receptors (ER), α and β could result in different behavioral patterns. Indeed, these two receptors play an important, but unequal, role in the regulation of socio-sexual and fear-related behaviors. First, I ethologically characterized anxiety-related behaviors in adult female rats. Then, I systematically administered ER agonists to observe the role of ERs on behavioral responses and structure. Finally, I evaluated the role of the ERs in specific brain areas by silencing the expression of either the ERα or the ERβ with local administration of shRNA encoded with an adeno-associated virus directed against each of these receptors. All studies were conducted in a seminatural environment in order to obtain externally valid, transferable results. In this environment, several emotion-inducing stimuli were introduced to determinate ERs’ involvement on situation-dependent behavioral responses. ERα activation was necessary for the display of lordosis and paracopulatory behaviors in female rats, as well as for their sexual attractivity to males. Expression of ERα in the ventral nucleus of the hypothalamus (VMN) was necessary for lordosis. The receptor in the VMN also showed anxiogenic properties during exposure to white noise. My findings suggest that ERα in the VMN had anxiogenic properties in threatening situations, and facilitated copulation in safe environments. Treatment with ERβ agonist modified behavioral structure during exposure to aversive stimuli, and silencing this receptor in the CeA increased rat anxiety. Therefore, I conclude that ERβ has anxiolytic properties, partly acting through the CeA. Better understanding of the implications of each ER within different brain structures will help unveiling their seemingly opposite roles.

Paper I: Le Moëne, O. & Ågmo, A. (2019). Responses to positive and aversive stimuli in estrous female rats housed in a seminatural environment: Effects of yohimbine and chlordiazepoxide. Pharmacology, Biochemistry and Behavior, 179, 43-54. Also available in Munin at https://hdl.handle.net/10037/17126.