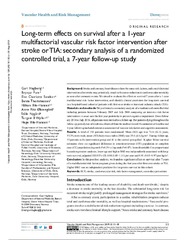 Background - Stroke and coronary heart disease share the same risk factors, and a multifactorial intervention after stroke may potentially result in the same reduction in cardiovascular mortality as seen after coronary events. We aimed to evaluate the effect on survival 7 years after a 1-year multifactorial risk factor intervention, and identify clinical predictors for long-term survival in a hospital-based cohort of patients with first-ever stroke or transient ischemic attack (TIA).

Materials and methods - We performed a secondary analysis of a randomized controlled trial including patients between February 2007 and July 2008 comparing an intensive risk factor intervention vs usual care the first year poststroke to prevent cognitive impairment. From February 2014 to July 2016, all patients were invited to a follow-up. For patients dying throughout the follow-up period, date of death was obtained from the medical record. Examination at baseline and 1-year follow-up included extensive assessment of vascular risk factors and cognitive assessments.

Conclusion - In this post hoc analysis, we found no significant effect on survival after 7 years of a multifactorial risk factor program given during the first year after first-ever stroke or TIA. Higher BMI was an independent predictor for long-term survival in this cohort.